The #metoo movement empowered many victims of sexual assault – mostly women – to speak openly about their experiences. Many stories began to emerge about harassment, groping, and even rape. However, one type of sexual assault was mentioned less frequently: sexual coercion.

Sexual coercion is classified as a duress crime. Coercion involves obtaining consent from a person in such a way that their consent was given under pressure. This type of consent is not the product of a person’s free will. Sexual coercion is a serious crime. It’s in your best interest to contact a sex crimes attorney for advice. 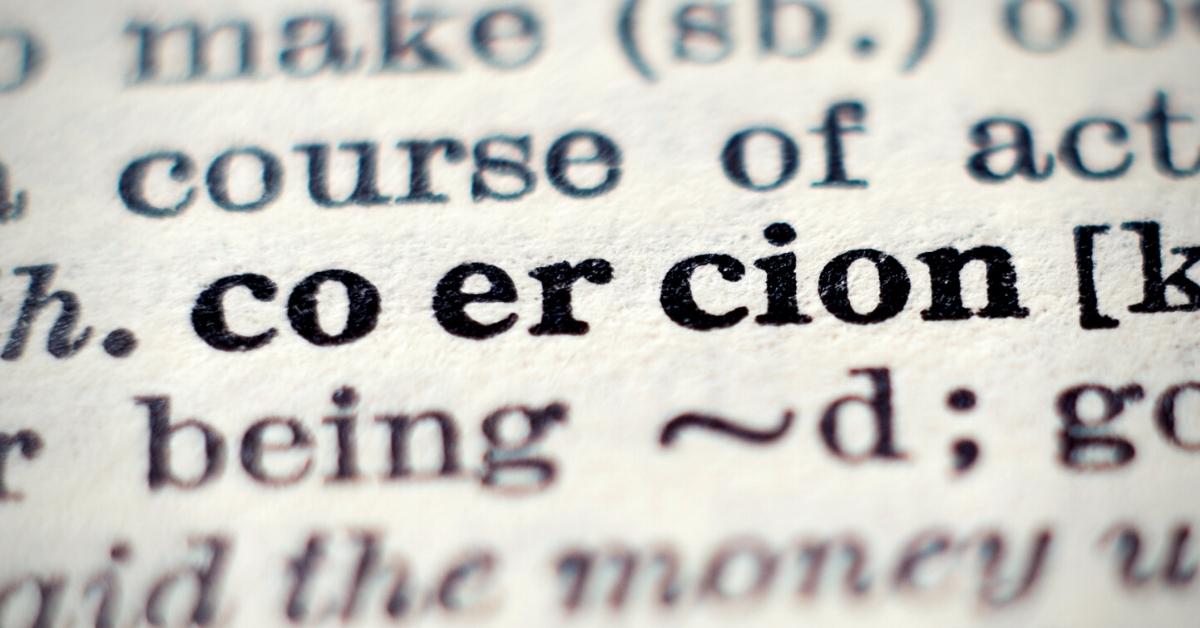 We believe that everyone is entitled to a proper defense when accused of a crime. This idea is central to our democratic justice system. We offer a free consultation for you to discuss your case with a lawyer.

What is Sexual Coercion?

A healthy sexual relationship is defined by mutual, voluntary consent between the two parties. Rape is the act of engaging in sexual intercourse when one of the parties doesn’t consent. Sexual coercion falls somewhere in the middle. A victim of sexual coercion may feel forced to participate in sexual activity.

The criminal act of sexual coercion is defined by Texas Penal Code Section 21.18. In order to convict, a prosecutor must prove that the following elements occurred:

Coercion using compromising information about a person is called blackmail. Another common type of coercion, called extortion, relies on the use of threats and force to obtain something of value, usually money.

What Are the Penalties for Sexual Coercion in Texas?

Sexual coercion is classified as a state jail felony. If convicted of this crime, you could face a term of imprisonment ranging from 180 days to two years.

Texas law provides more severe punishment for repeat offenders. If you were previously convicted of sexual coercion, the new charge is classified as a third-degree felony. A felony of the third degree carries a 2- to a 20-year prison sentence.

Putting your life on hold while you’re behind bars is already difficult, but a jail stay is only temporary. Your felony criminal record will follow you for the rest of your life. It will come up any time a background check is run. A felony on your criminal record will make it difficult for you to find somewhere to live and work. It could also impact your ability to qualify for loans. It’s crucial that you contact a sex crimes attorney for a thorough defense.

A Real-World Example of Sexual Coercion in Texas

In September 2018, a Waco man pled guilty to sexual coercion charges. A married man told the defendant he had had sex with a woman who recorded the encounter as a “sex tape.” The defendant allegedly obtained the laptop containing a recording of the sexual encounter and used it as leverage against the man. If the man didn’t pay $20,000, the defendant threatened, he would release the tape to the man’s wife.

The defendant got off relatively lightly. Instead of jail time, he walked away with a $750 fine and four years of probation. He was also ordered to pay back the money he extorted from the victim.

What Does ‘Sexual Coercion’ Say About a Society? | NPR – National Public Radio is a non-profit media organization funded by a combination of public and private funds. Visit this link to read an article about the use of sexual coercion by species other than human beings. You can also read about how the level of aggression observed in the pornography of different countries correlates to perceived gender equality in those countries.

It’s time… to talk about consent. | NSVRC – The National Sexual Violence Resource Center published a pamphlet in 2012 centering on the topic of consent. Visit this link to read about what qualifies as consent. You can also read about methods for establishing clear consent and view additional resources.

The sex crimes attorneys at our firm have years of experience defending clients just like you. Don’t sit back and accept whatever fate awaits you; contact our firm today to get started on your defense. It could mean the difference between a clear criminal record and a blemish that damages your reputation and ability to live freely.